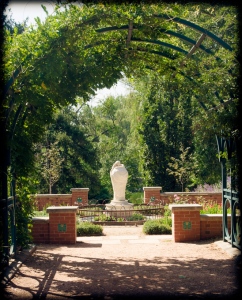 The Horticultural Art Society contracted with Larry Terrafranca to carve a statue inspired by the famous Lorelei Vase by Artus Van Briggle (1869-1904) who established his pottery studio in Colorado Springs in 1901.

Artist and sculptor Larry Terrafranca approached the Horticultural Art Society in 2015 with the idea of sculpting a representation of Artus Van Briggle’s Lorelei vase for the Heritage Garden. He suggested placing the sculpture at the center of the formal walled parterre which contains more than 50 Van Briggle tiles, at the south end of the garden.

No single piece of art pottery has captured the hearts and imaginations of collectors like the Lorelei vase of Artus Van Briggle. Sculpted in the Art Nouveau style, the Lorelei is reminiscent of the German Romantic tale of a beautiful young woman who distracted Rhine River sailors to their destruction.

Auctioneer David Rago, foremost expert in American Arts and Crafts pottery and appraiser on the Antique Roadshow, stated: “This vase, which bears a signature in Van Briggle’s hand, is the only two-color version from 1902, essentially the first multi-color Lorelei known, and one of only a few of his iconic form of such early vintage. The modeling is excellent, as is the condition. I would think that, if one only wanted an exceptional single example of Van Briggle’s work, this may as well be it.”

Rago was indeed correct about the desirability and rarity of this vase, but understated its potential value to collectors, which soared to $275,000 well above the estimate of $50,000 to $75,000, surely an auction record for a Van Briggle vase! In an  article  of the Arts and Crafts Collector’s Newsletter, Bruce Johnson describes the Lorelei vase as “by far the most popular vase ever designed and produced at the Van Briggle Pottery, and possibly the most famous piece of American art pottery ever produced.” 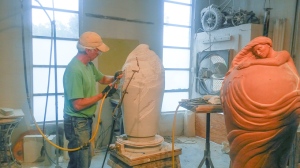 Larry Terrafranca in his Colorado Springs studio with sculpture in progress