Article by Diane Brunjes, HAS Gardener, published in February 2020 HAS Announcements 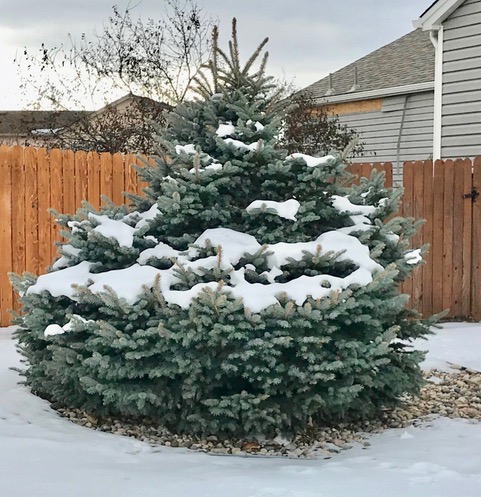 Living in a northern climate as we do, makes one appreciate anything that brings color and life to the garden in the winter. And there seems to be nothing that does that better than conifers. Strictly speaking, the ones we are referring to are evergreens. There are however, conifers that are NOT evergreens, like larches (Larix), the bald-cypress (Taxodium) and the dawn redwood (Metasequoia), which all lose their needles for the winter. But the ones we will focus on now are the ones that retain their needles over the winter – hence, ever-green.
Many gardening experts and designers say that your garden should be composed of approximately 30% evergreens. This figure can be adjusted to suit your tastes, but how many of us can claim that we get anywhere near that percentage? But considering that most of the garden is D-O-N-E by late October, and really doesn’t get going again until April, that leaves at least five full months of drab – unless you plan and plant carefully.
Of course, many perennials bring winter interest, like sedums, opuntias, grasses, agaves, penstemons with its evergreen foliage, hellebores, coneflower seedheads, and artemisias are just a few of the flowering herbaceous plants that we can rely on for winter interest. At least, until that two-foot snowstorm with 40 mile-an-hour winds occurs, and then most of our interest is plowed under until the next growing season.
That’s why adding evergreens to your garden can be the year-round boost that you might be looking for without realizing it. One of the evergreens we will be adding to the sensory garden this year is Pinus nigra ‘Bambino’. The name alone is enough reason to grow it, but its dwarf nature and tight branching certainly are other reasons. Forming a low wide dome over many years, this evergreen eventually becomes so dense, that reaching in with a gloved hand every two or three years becomes necessary to clean out the accumulation of fallen needles. Although it looks very “pet-able”, the needles retain the stiffness of the Austrian pine, and if you do clean, do it carefully. Look for it in the HAS Gardens this spring.
Another evergreen we are excited to be adding is the very narrow exclamation point Juniperus scopulurum ‘Blue Arrow’. A selection of our native Rocky Mountain juniper, this is even narrower and slightly smaller than J. ‘Skyrocket’. Its new growth tends to be slightly bluer, but this varies per specimen, as we have seen some that definitely trend more towards green. We will be adding three of these in the Demo Garden. This kind of exclamation point has several design functions. In one spot it will “stop” the eye, in another, it will be simply a backdrop to other features, and in a third spot, it will be that exclamation mark that is so useful in the garden if not overused. In ten years, these junipers will be 12-15 ft tall x 2 ft wide.
If you are looking for design inspiration for your own garden, be sure to google The Bressingham Gardens in Norfolk, England. Some conifer gardens can feel heavy and even a bit oppressive, but Adrian Bloom makes amazing use of grasses, vibrant-stemmed dogwoods, and deciduous plants to bring lightness and movement to his garden. Be warned, though, if you watch the video on their website, you will think it is just a perennial garden! Bloom used to use, very heavily, heaths and heathers (which we can’t grow) but in the last decade has begun to move to the above-mentioned groupings. This has horrified some conifer garden purists, but makes a very welcome change, we believe, for everyone else.
Happy Gardening, and as always, come visit the Gardens! 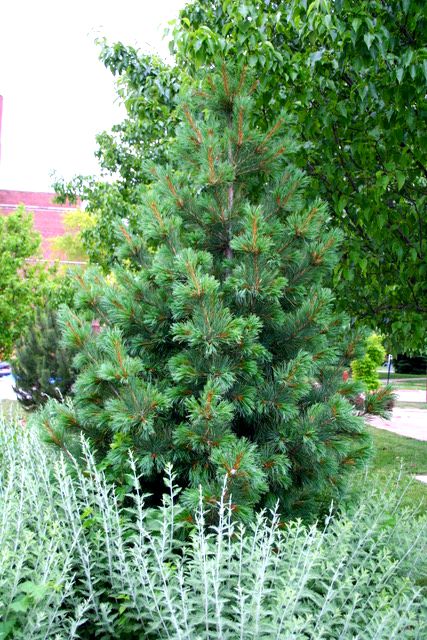 P.S. If you would like to reserve one of these trees that will be offered at the Plant Sale, please click on the links provided below.